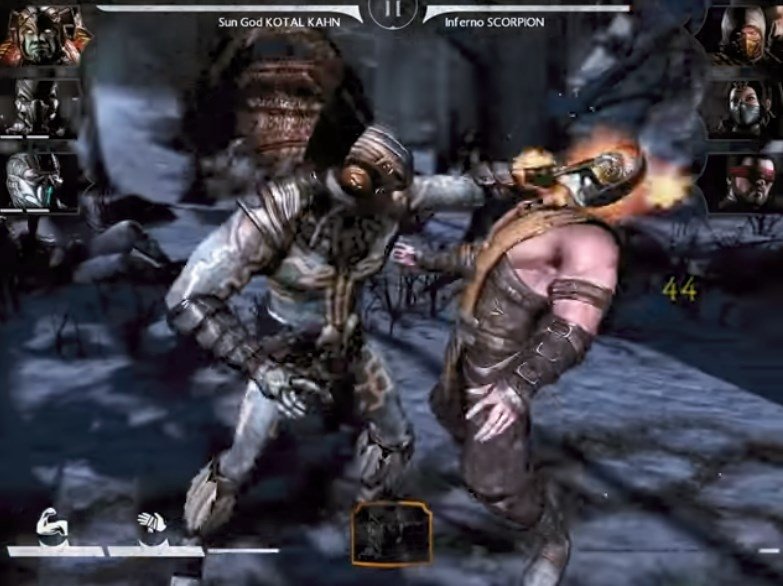 Mortal Kombat Trilogy is a fighting game released by Midway in 1996 as the second update to Mortal Kombat 3 (the first being Ultimate Mortal Kombat 3) for the PlayStation, Nintendo 64, Sega Saturn and PCs. Further versions were also released for the Game.com and R-Zone. It features a similar basic gameplay system and the same story as Ultimate Mortal Kombat 3, but adds characters and stages restored from Mortal Kombat and Mortal Kombat II. New additions to the game included the 'Aggressor' bar, and a new finishing move called Brutality, a long combination of attacks that ends with the opponent exploding. The game was met with mixed reviews upon release.

Mortal Kombat Trilogy introduces the Aggressor bar, which fills as the combatants fight (twice as much if the opponent is blocking). Once the bar is filled, it grants the character fast movement and greater attack damage for a short period of time.

Many characters gained additional special moves. Some were simple edits of existing moves (such as Stryker throwing two grenades instead of one), while others were unused animations never implemented in their intended previous games. These special moves included MK Kano's Knife Spin move, MKII Kung Lao's Air Torpedo, Goro's Spinning Punch move, Raiden's Lightning that shoots from behind the opponent, and Baraka's Blade Spin move. Additionally, Shao Kahn gained a throw and grab-and-punch move, and Motaro gained a proper throw move. Sub-Zero's famous 'Spine Rip' Fatality reappears in the game but is completely censored, as the screen blacks out with only the 'Fatality' text visible. This was due to avoid having to re-animate the fatality for this game.

Trilogy adds the 'Brutality' finishing move, which requires the player to perform an 11-button combo in order to rapidly beat on their opponent until they explode. (Brutalities have been previously featured in the Mega Drive/Genesis and SNES ports of UMK3.) All of the arenas that featured a Stage Fatality are featured in this game, except the Pit II.